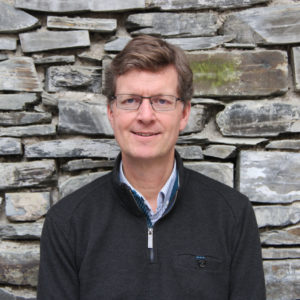 Andrew is passionate about the countryside, wants to make a positive difference to safeguarding our environment for the future and has an extensive background in the IT and Utility sectors.

Since graduating in Physics with Astrophysics from the University of Leeds in the mid 80’s, Andrew’s career has been spent in the UK and overseas in the Energy and Utility Sector.

Much of that time he worked for National Grid including several years on Executive Committees where he had risk management, financial and health and safety responsibilities. Andrew has particular experience in IT and was Chief Information Officer for a number of years with international responsibility for National Grid’s applications such as SMART grid, control rooms, web, customer systems etc. He also had business roles including the creation and management of National Grid’s Transmission Network Control Centre.

Since leaving National Grid, Andrew has worked predominantly in the Middle East as a management consultant in the IT and Utility sectors. This included roles in the the United Arab Emirates’ advising the Government on transforming its electricity generation and water production plants from fossil fired to Renewables, and optimising its Distribution, Transmission and System Operator functions.

Andrew is passionate about the countryside, is a very keen hiker and wants to make a positive difference to safeguarding our environment for the future. He is married to Deborah and has two sons both currently at University. He has a home in Corris and now works part time so is enjoying even more time in the mid Wales countryside with his wife and two standard poodles.