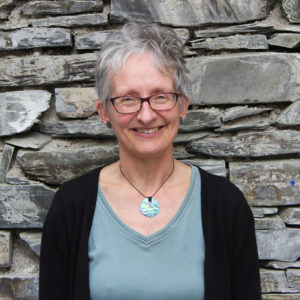 Sally fell in love with CAT after coming as a short-term volunteer in the 1980s. Before joining as a trustee, she was a staff member in the fundraising team, having previously spent around 20 years as a trainer and coach in leadership and team development.

She then worked for many years in organisations, offering leadership development training, team-building and coaching, as well as training other professionals in the use of a variety of psychological tests.

In 1986, while studying for her DPhil, she came to CAT for the first time as a short term volunteer (STV), and instantly fell in love with the place. She came many times as an STV during the late 1980s, and then after a gap, returned in 2001, once again as an STV. At that point she decided to make a bigger commitment to CAT and moved to Machynlleth to take over looking after STVs, as a volunteer herself.

She joined CAT as a member of the newly-formed Operations Team in 2010, and then when that was dissolved in 2012, she moved to Fundraising, where she worked until the end of February 2019. She is now semi-retired, and busy renovating a derelict house with her husband Mike.