Analysis: Why we can’t choose fracking

So, we already know why we don’t need fracking, but there are very good reasons for saying we quite simply can’t have it.

“Shale gas is categorically not compatible with the UK’s obligation to make its fair contribution to avoiding the 2°C characterisation of dangerous climate change – the maths on this are clear and unambiguous.”

–  We really can’t sum it up any better than this comment from Kevin Anderson, a professor of energy and climate change at the University of Manchester and ex-director of the Tyndall Centre, the UK’s leading academic climate change research organisation.

But others have said it too:

“The world should not be searching for new sources of fossil fuel. We can’t even burn all of what we already have. We need to keep the coal, oil and the gas in the ground” says Simon Bullock (of Friends of the Earth) on releasing a report on ‘unburnable carbon’ last year.

The Carbon Tracker initiative, looking at fossil fuel reserves already listed by the top 200 coal, oil and gas companies on the stock exchange, state that “just the listed proportion of reserves in the next 40 years is enough to take us beyond 2°C of global warming.” And that these are just 27% of known conventional fossil fuel reserves, not including those from most unconventional sources like fracking.

Economist Dieter Helm sums up the issue: “The problem is that we have too much fossil-fuel  resource, not too little – enough to fry the planet several times over.”

Kevin Anderson explains what the problem is, when commenting on the shale gas report released recently by the House of Lords: “Climate change is a cumulative issue – it is about the build up of carbon dioxide in the atmosphere. The 2°C threshold between dangerous and acceptable climate change comes with a carbon budget; i.e. how much CO2 we can emit into the atmosphere.”

The global carbon budget is pretty well defined (here, in the most recent IPCC report see details on ‘cumulative carbon emissions’ (see page 27), and a useful explanation here). We can say what chance we have of avoiding that 2°C threshold given the amount of carbon we release into the atmosphere in total – cumulatively. The less carbon we release, the higher our chances of avoiding ‘dangerous’ climate change.

But how we share the global carbon budget out amongst countries is a little more tricky. One way to do it would be to say each person in the world gets the same share, starting now, which means a country’s allocation would just be based on its population. But this doesn’t take account of the fact that people in the UK have benefited from being a high emitter in the past . Since most emissions remain in the atmosphere for hundreds of years, a substantial amount of what is now in the atmosphere is ‘ours’. We can choose to divide the global carbon budget into countries’ shares from different dates – the earlier the date we divide it up, the more responsibility we take for emitting more than our fair share historically.

The chart shows some examples of this: 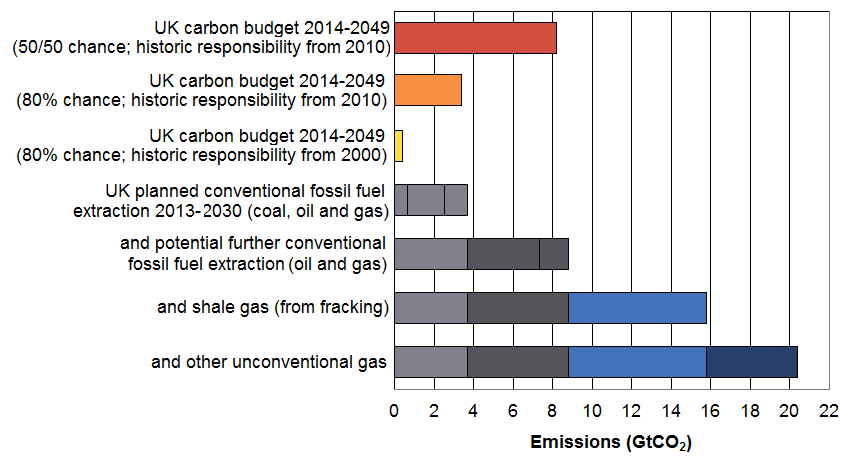 Figure 1: Comparison between UK’s share of the global carbon budget for different chances of avoiding a 2oC global average temperature rise (orange; red) and the emissions associated with burning various known fossil fuel reserves in the UK (grey, blue). Note: These figures are are calculated excluding emissions from international aviation and shipping, and are in gigatonnes carbon-dioxide (GtCO2), to make data comparable to those for fossil fuel reserves. They do not, for example, include methane (CH4) that may be released in extraction or distribution of gas. in Zero Carbon Britain: Rethinking the Future, conventionally we use gigatonnes carbon-dioxide-equivalent (GtCO2e) which encompasses all greenhouse gases. For this reason, the budgets used here do not appear the same as those in the latest ZCB report.

The figure above shows exactly what the problem is for the UK – comparing various potential ‘carbon budgets’ to our remaining and potential fossil fuel reserves (both conventional and unconventional). We can see that with a decent (80%) chance of avoiding 2°C, and taking historical responsibility for our emissions back to just 2000 would mean that burning even those conventional fossil fuels projected by UK government would take us way over the 0.4 GtCO2 budget.

If we relax our morals and take almost no historical responsibility, we still can’t burn everything we plan to before blowing our larger budget of 3.4 GtCO2.

In fact, even with a 50/50 chance – which is no better than flipping a coin to see if we will avoid 2°C, and taking almost no responsibility for our actions in the past (bringing our budget to 8.2 GtCO2), we still can’t burn all of the potential conventional fossil fuel reserves in the UK. In fact, Carbon Tracker states in its report “London currently has 105.5 GtCO2 of fossil fuel reserves listed on its exchange”, and that “just one of the largest companies listed in London, such as Shell, BP or Xstrata, has enough reserves to use up the UK’s carbon budget to 2050”

And thats before we even start talking about carbon from unconventional fossil fuels like shale gas from fracking.

Friends of the Earth say “The UK plans on producing far more than a reasonable share of the world’s burnable carbon. Shale gas is just adding to a huge unburnable carbon problem.“

And they’re totally right – no carbon budget for the UK which holds any moral, or ethical sway stretches far enough to be able to start getting at unconventional fossil fuels like those from fracking.

The lesser of two evils?

But isn’t gas better than coal from a carbon perspective? Shouldn’t we be fracking for gas so we can get rid of coal power stations? What about gas as a ‘bridging’, or ‘transition’ fuel to a renewable future?

Professor David MacKay’s report on shale gas for the UK government Department of Energy and Climate Change (DECC), reiterated in evidence he submitted to the Committee preparing the Lords’ report (see pages 353-4), states that “If a country brings any additional fossil fuel reserve into production, then in the absence of strong climate policies, we believe it is likely that this production would increase cumulative emissions in the long run. This increase would work against global efforts on climate change.”

Shale gas, like any other fossil fuel, emits carbon dioxide into the air when burnt to produce energy. As such, Anderson comments, “In that regard it is certainly not a transition fuel and if we are serious about our explicit climate change commitments the only appropriate place for shale gas remains deep underground.“

[Note: there are countless more detailed arguments against exploiting shale gas and other unconventional fossil fuels as a ‘bridging’ or ‘lower carbon’ fuel. Some can be found here, here and here.]

It simple: as Bullock states: “The UK should call a halt to new oil, gas and shale gas exploration, and invest in energy efficiency and renewable power instead.” We know this works, and we know we will, regardless of what carbon budget we stick to, have to transition to a zero-carbon and carbon-neutral energy system like that outlined in CAT’s Zero Carbon Britain: Rethinking the Future. We show that we have all the technology we need already, and transforming our society in this way, without fracking for gas, gives us the best chance possible of avoiding that 2oC threshold.

CAT’s course in Renewable Energy and the Built Environment teaches the real solutions for eliminating greenhouse gases from our energy system. Apply now to start in September.