Where’s the impact of a home-baked cake?

In this series, we’ve been investigating the environmental and social impacts of various consumer products. Inspired by CAT Education resource Where’s the Impact? we’ve been attempting to unpick the tangled web of relations responsible for what we buy.

We’ve so far investigated an Easter egg, a book, and a cotton t-shirt. Last week we looked at pads and tampons and were surprised to discover that we discard 200,000 tonnes waste from menstrual products every year in the UK alone.

In this post, we’ll have a look at the impact of a home-baked cake. We’ll focus on a few elements in particular, namely the eggs, flour, and sugar. As ever, we welcome your comments so help us tell the story by posting below, or make suggestions as to what we could cover in the future. 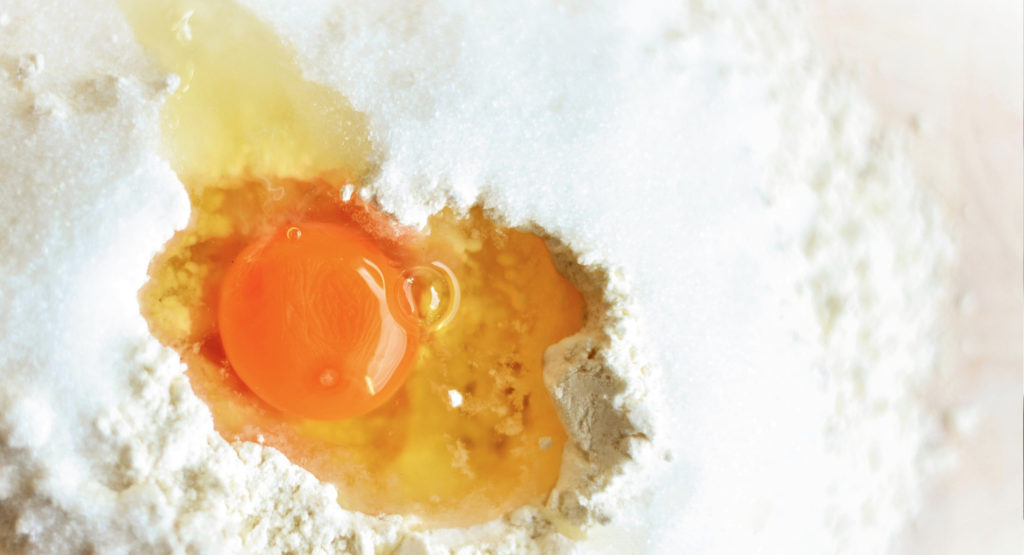 Now, not all cakes need include eggs

In fact, a favourite recipe of mine does without them and still produces a highly tasty result.

If we do include eggs, we increase the carbon footprint of our cake by a fair bit, considering that one box of eggs is equivalent to around 1.8kg of C02 (according to How Bad are Bananas? by Mike Berners-Lee).

Berners-Lee states that eggs are “less carbon intensive than some animal products but more so than most vegetable-based foods.” As chickens aren’t ruminants, like cows, they don’t produce a large amount of methane, meaning that they have a significantly lower impact.

As with any food product, there’s the transport and packaging to consider as well. In the case of eggs, the transport generally isn’t too considerable and the packaging can easily be recycled, either with your council or more ingeniously as trays for sowing seeds, which can be planted out directly when ready.

As we mentioned in our investigation into Easter eggs, farming intensively generally results in lower emissions. However, as organisations like PETA have made clear, intensive farming is highly unethical; Mike Berners-Lee makes the sage suggestion of buying fewer eggs but ensuring that they’re organic and free range.

I’ve long had a slightly bizarre interest in one day baking a loaf of bread from grain I grew, harvested and milled myself. However, I haven’t got anywhere near that goal.

It takes 350 ears of wheat to produce one 800g loaf of bread, so we need a fair bit of the stuff. In the UK, our flour consumption is about 74kg per capita. It’s bizarre to think that I probably eat my weight in bread every year.

The largest impact from flour production is in growing the wheat. While milling flour generally uses electricity – some super-ethical brands available mill their flour using water and wind, old-school style – it is by and large an efficient process with only a small amount of waste produced. Mills are also often situated near farms, reducing the amount of transport necessary.

Wheat has a large water footprint; a study from the University of Twente found that global wheat production requires around 1088 billion cubic metres of water every year; the average ton of wheat crop requires 1830 cubic metres of water. Freshwater, as they note, is a renewable yet finite resource.

Thoroughly necessary for any cake – unless you’re making a fruit cake sweetened by the might of fruit alone. Sugar has a fairly dodgy history; Ethical Consumer claim that “sugar is arguably the most intensely political commodity of all time.”

Earlier this year, the Fairtrade Foundation released “Fairtrade Sugar: Starting a Sweet Revolution,” a report which includes the encouraging fact that 42% of the retail market for sugar is now Fairtrade. However, poverty is still a massive problem for producers in developing countries. As they write, “the trade in, and production of, sugar has a long and sometimes dark history and today sugar plays a key role in the livelihoods of millions of people and the economies of many countries.”

And, as it’s grown as a continuous mono-culture, producing sugar involves a constant battle to maintain soil fertility. Other associated problems include the salinisation of soils due to over-irrigation, and acidification due to fertiliser usage. Sugar also has a considerable water footprint, requiring 1200mm of rainfall to produce a good yield.

Is it better to buy a cake, or make your own? Well, one thing’s for certain – in making your own, at least you’re sure about what’s gone in. A cake commercially made is likely to include non-free range eggs, non-organic flour, and non-Fairtrade sugar. For example, while there’s been some success in switching the retail sugar market to Fairtrade, the industrial market is making the change at a much slower pace.

As for energy use, it’s possible that buying a cake made commercially is more energy efficient – but that’s discounting the energy involved in packaging and distribution. Furthermore, you can be savvy with that energy: bake a cake in winter and warm your home a bit in the process; turn the oven off in the last five minutes and leave the cake to cook in the residual heat; pour the mixture into muffin tins instead for a much quicker baking time.

Where’s the Impact? is an innovative teaching resource exploring the ecological footprint of products. There are literally thousands of processes involved in the production of any given product – to raise awareness about the impacts of production, pupils use a set of cards to tell the story of a product from beginning to end.